United Community Bank Ranks #1 in Customer Satisfaction with Consumer Banking in the Southeast, 7 out of the Last 8 Years

, /PRNewswire/ --  is proud to announce it once again is ranked Highest in Customer Satisfaction with Consumer Banking in the Southeast according to the 2021 U.S. Retail Banking Satisfaction Study℠. This marks an unprecedented seven out of the past eight years that United has received this recognition, a testament to the bank's commitment to having a strong foundation of customer service. 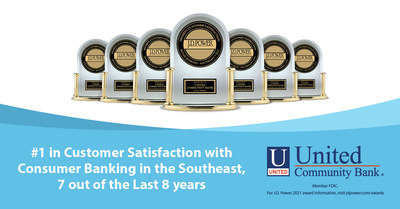 is ranked #1 in Customer Satisfaction with Consumer Banking in the SE according to .

"We believe that service quality is the driver of success in our business.  We call ourselves 'The Bank that Service Built' to remind us both of our heritage of service and our daily commitment to live out that goal. We are honored to be delivering on our brand promise," said , Chairman and Chief Executive Officer of . "I am incredibly proud of our team members who have worked tirelessly to make a difference for our customers in a challenging year.  This recognition belongs to them."

The J.D. Power Retail Banking Satisfaction Study is the longest-running and most in-depth survey of the retail banking industry. Now in its 16th year, the annual study analyzes retail banking customers' satisfaction with their primary financial institution and the impact it has on bottom-line metrics, such as retention, loyalty, and advocacy. In addition to being the most trusted consumer bank in the Southeast, the study ranked United #1 in the following factors: Channel Activities, Product & Fees, Convenience and Communication & Advice.

The 2021 study is based on responses from 94,784 retail banking customers belonging to 180 of the largest banks in regarding their experiences with their retail bank. It was fielded from through . For more information about the Retail Banking Satisfaction Study, visit http://www.jdpower.com/pr-id/2021037.

About United Community Banks, Inc.
United Community Banks, Inc. (NASDAQ: UCBI) (United) provides a full range of banking, wealth management and mortgage services for relationship-oriented consumers and business owners. The company, known as "The Bank That SERVICE Built," has been recognized nationally for delivering award-winning service. United has $18.6 billion in assets and 161 offices in Florida, Georgia, North Carolina, South Carolina and Tennessee along with a national SBA lending franchise and a national equipment lending subsidiary. In 2021, J.D. Power ranked United highest in customer satisfaction with retail banking in the Southeast, marking seven out of the last eight years United earned the coveted award. United was also named "Best Banks to Work For" by American Banker in 2020 for the fourth year in a row based on employee satisfaction. Forbes included United in its inaugural list of the World's Best Banks in 2019 and again in 2020. Forbes also recognized United on its 2021 list of the 100 Best Banks in America for the eighth consecutive year. United also received five Greenwich Excellence Awards in 2020 for excellence in Small Business Banking, including a national award for Overall Satisfaction. Additional information about United can be found at www.ucbi.com.